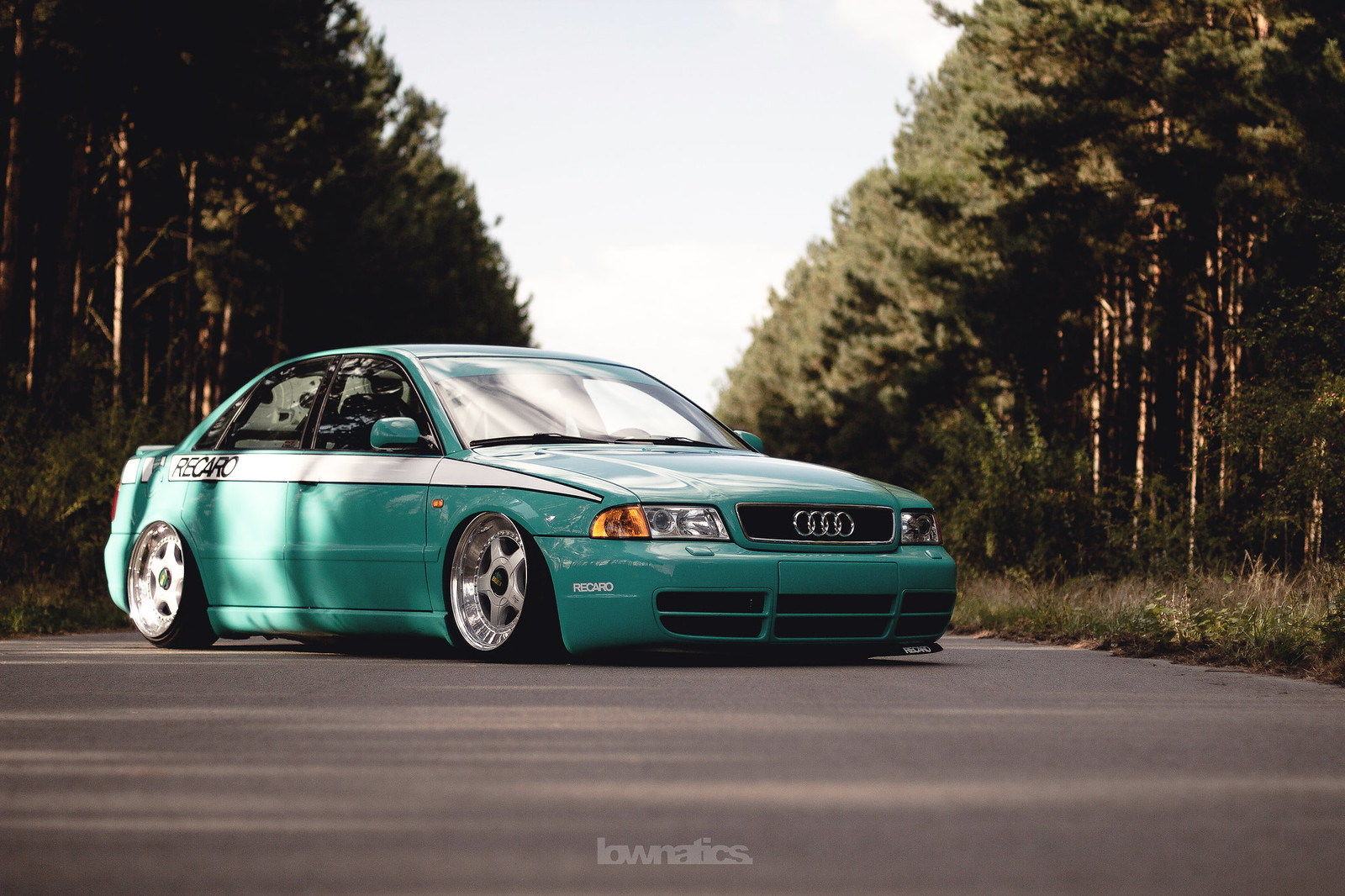 April 2012…the beginning of show season. That’s the time where Facebook changes to a sort of newspaper full of the latest builds and projects. It didn’t take long until I stopped scrolling because something caught my eye: Tiffany blue paint, slanted Lorinser wheels, orange indicators and full red taillights – pictures of a B5 A4 at a meet in Rothenburg near Görlitz in East Germany. I was speechless. It hit me like when you hit your small toe on a piece of furniture when running through your house. Still being in love with Miguel’s „MintyZ“ from last season, this A4 was just right. Totally my kind of style; different. Some trims where missing, a roll cage could be recognized – damn I wanted to see this car in person. 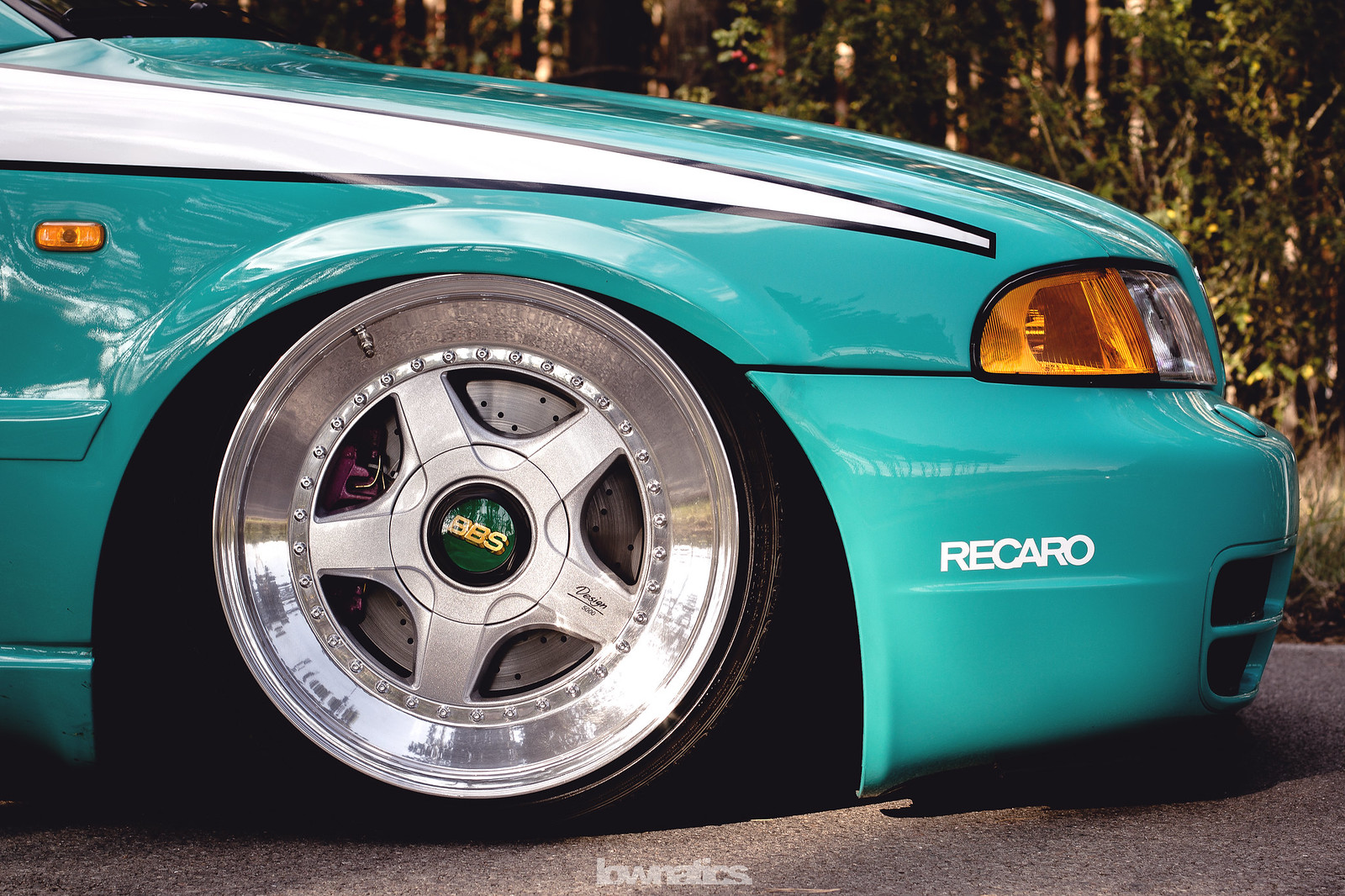 After missing this car at Wörthersee, I had the chance to see it a month after. XS Carnight in Dresden. Walking for an hour I still couldn’t find the turquoise A4. Just before leaving the event I finally found it; I guess that I just missed it by the entrance. But then the shock…he swapped the Lorinsers for Bentleys. Black centres, lips in car colour. Not so different anymore? Still with bright coloured wheels pursuing the trend from the years before? Sure, a cinnamon-brown leather interior and Bentley wheels is pretty luxurious, but the bright colours, roll cage and even roof rack? It seemed like he wanted to combine all the fancy styles in one. I was disappointed. 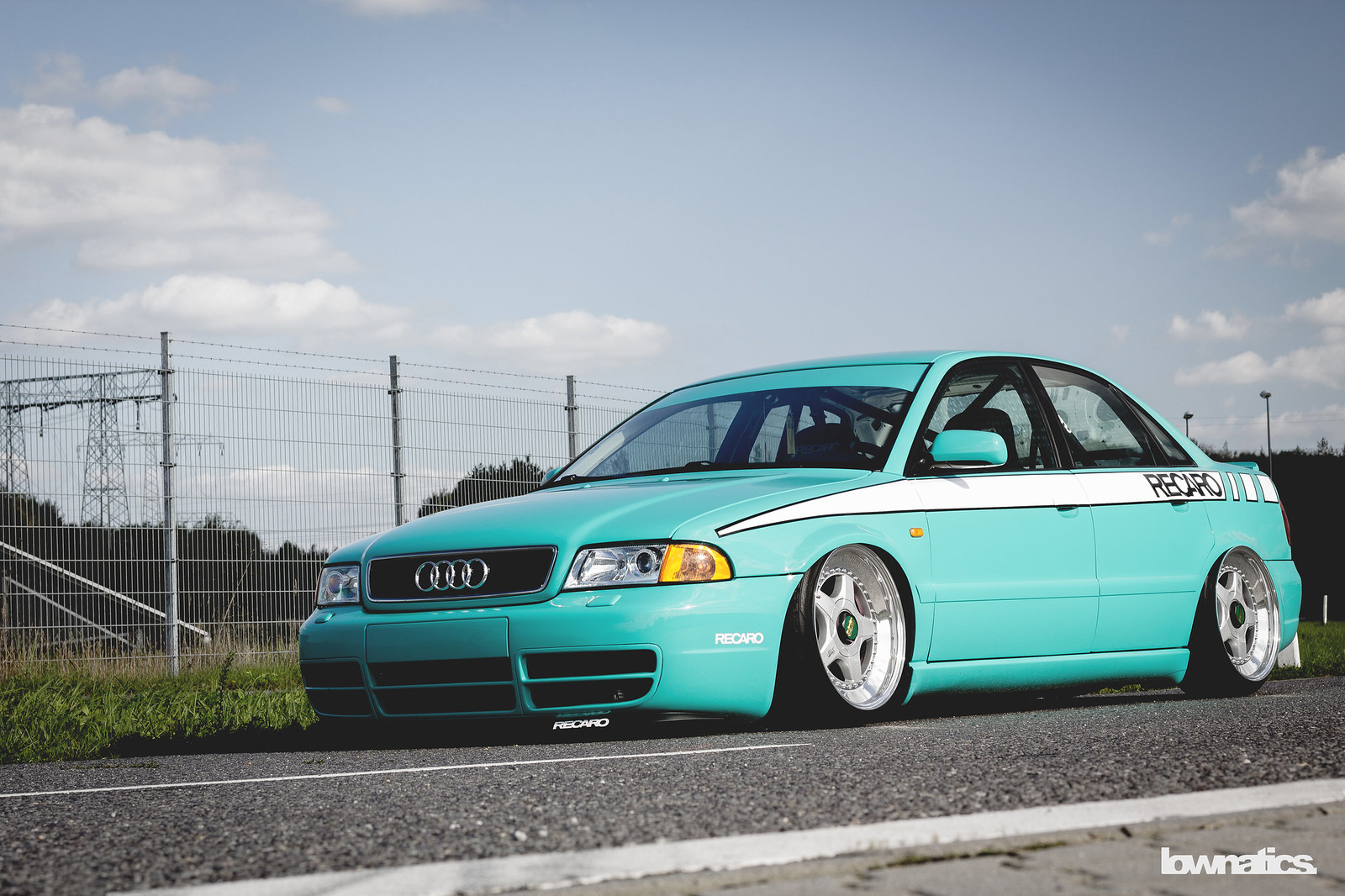 A German performance magazine featured this car at the end of the season. The Bentleys were gone and replaced with some ultra-rare BBS RTs from the Bugatti EB110, which a saw on a red A4 from Poland earlier that year. „Oh my god, how can he hurt my feelings that much“, I thought. I had my third set of three-piece wheels that year and was already looking for my next. I contacted the owner of the mint A4, thankfully it was very easy to find him on Facebook: Christian Adermann. 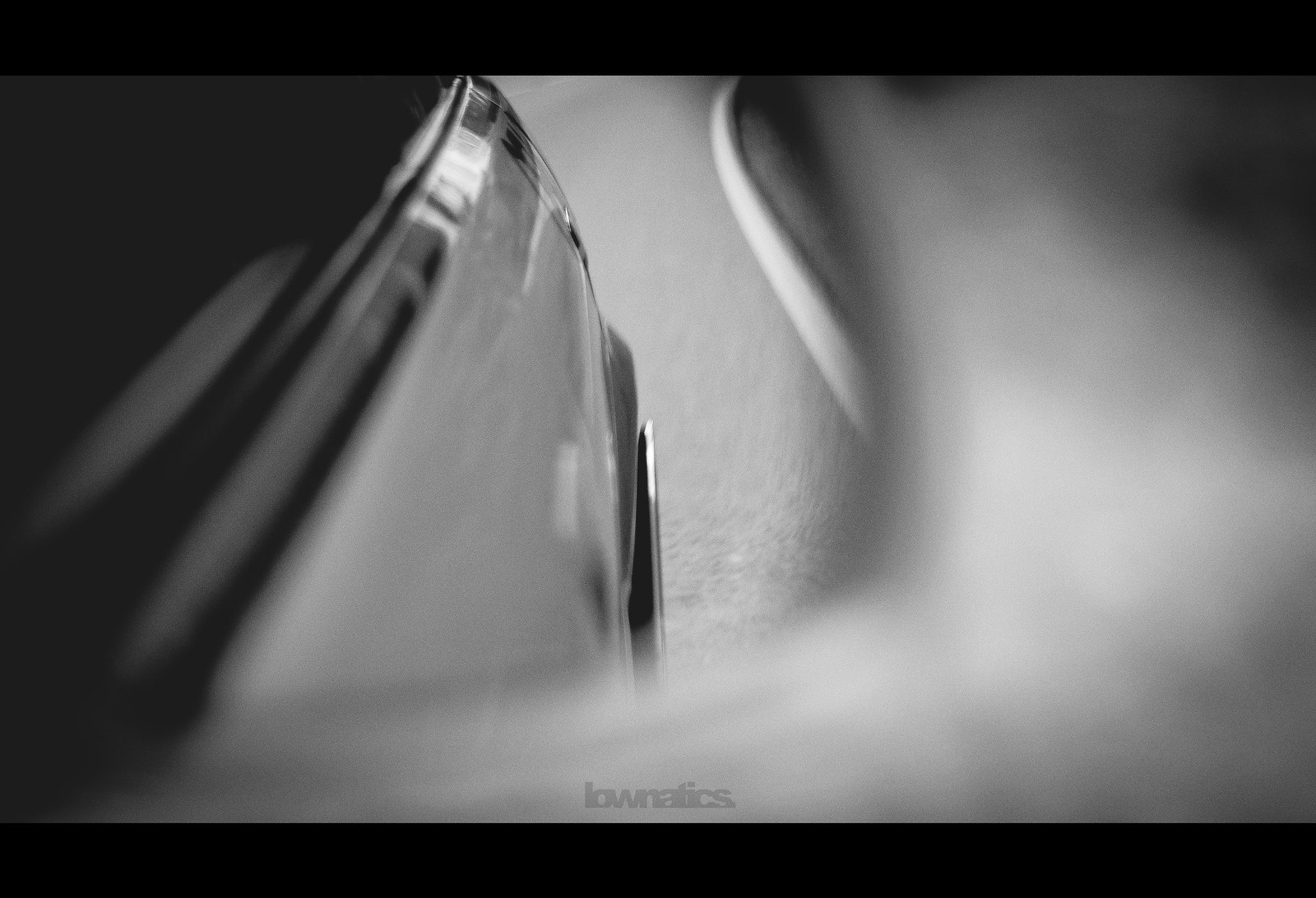 A few messages later, I knew it wouldn’t happen, it’s pretty hard to communicate with this guy. Being on his profile, I started to check his timeline for older pictures of his car. I couldn’t keep my mouth shut – WTF?! His oldest pictures were from 2010 but it was a different car. White, custom bumpers and Lorinser RSK2 wheels. A car with soul that has survived many different trends. It should turn out that he owns this car for 10 years! 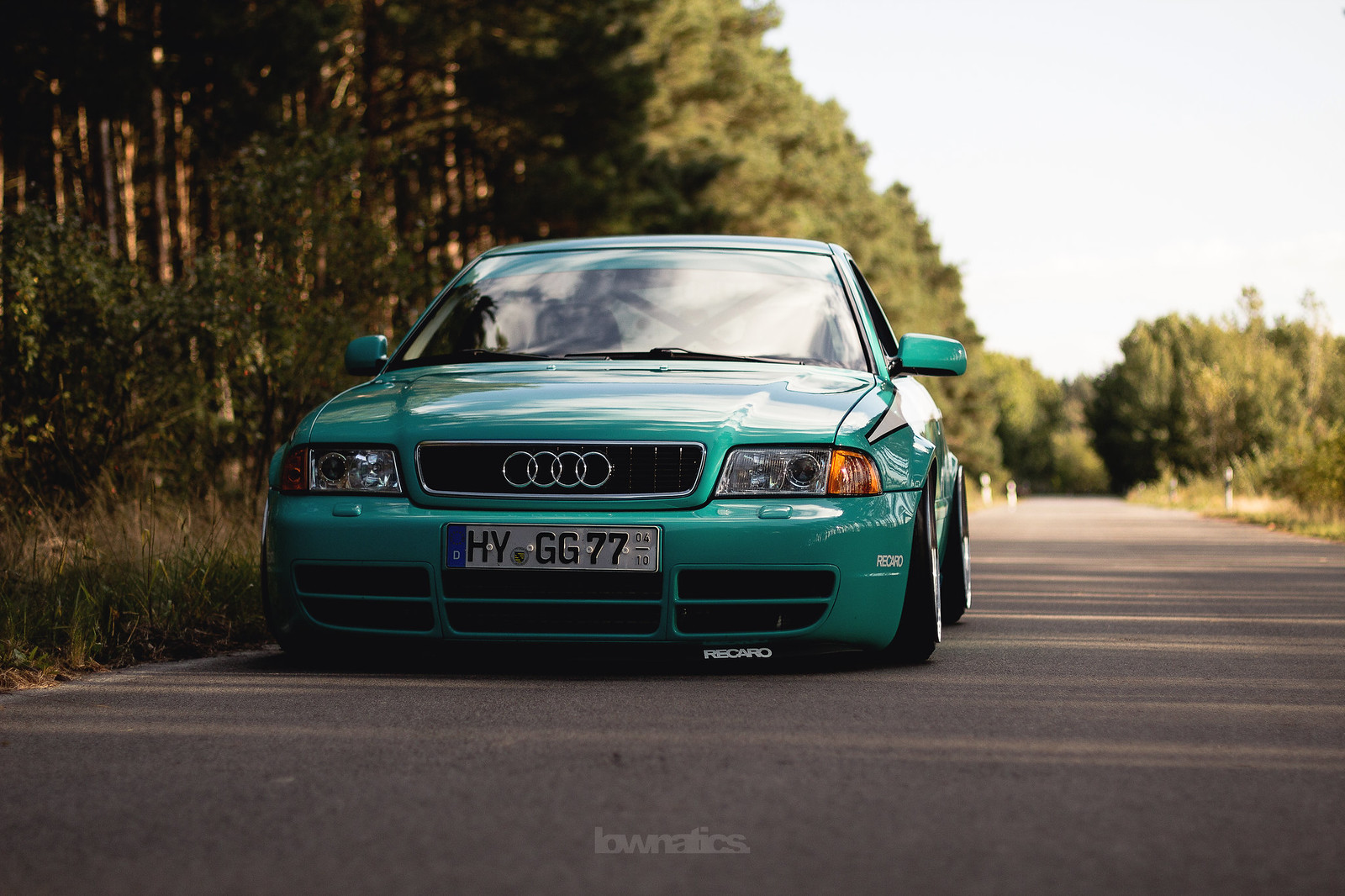 Staying in contact I finally met Christian on a meet in East Germany. I guess it was the love for the RSK2 Wheels which brought us together. I bought myself a set for winter. 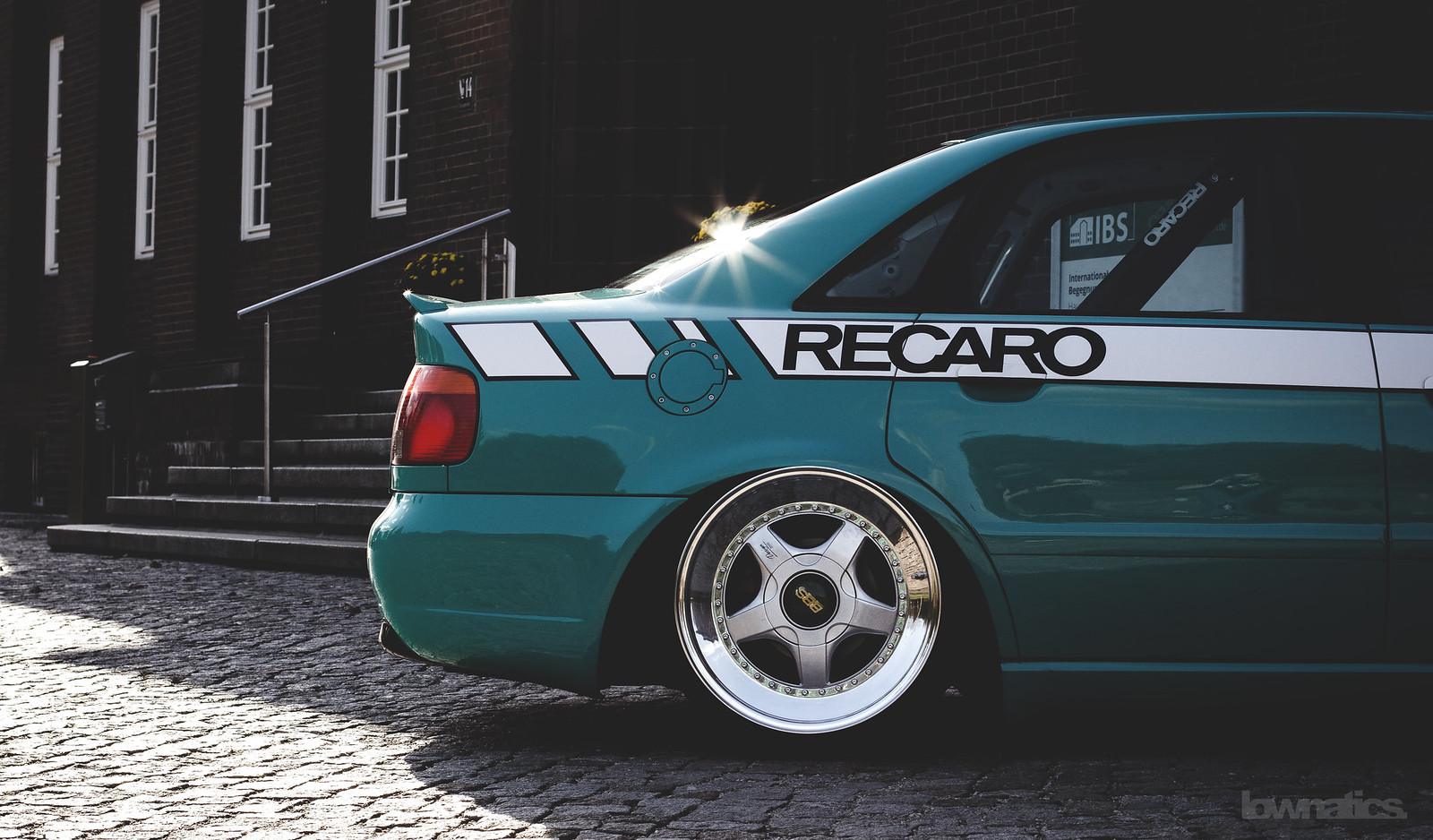 “Once I lost a center cap and Christian sent me another one really quick without asking for money, even though they are so rare.” 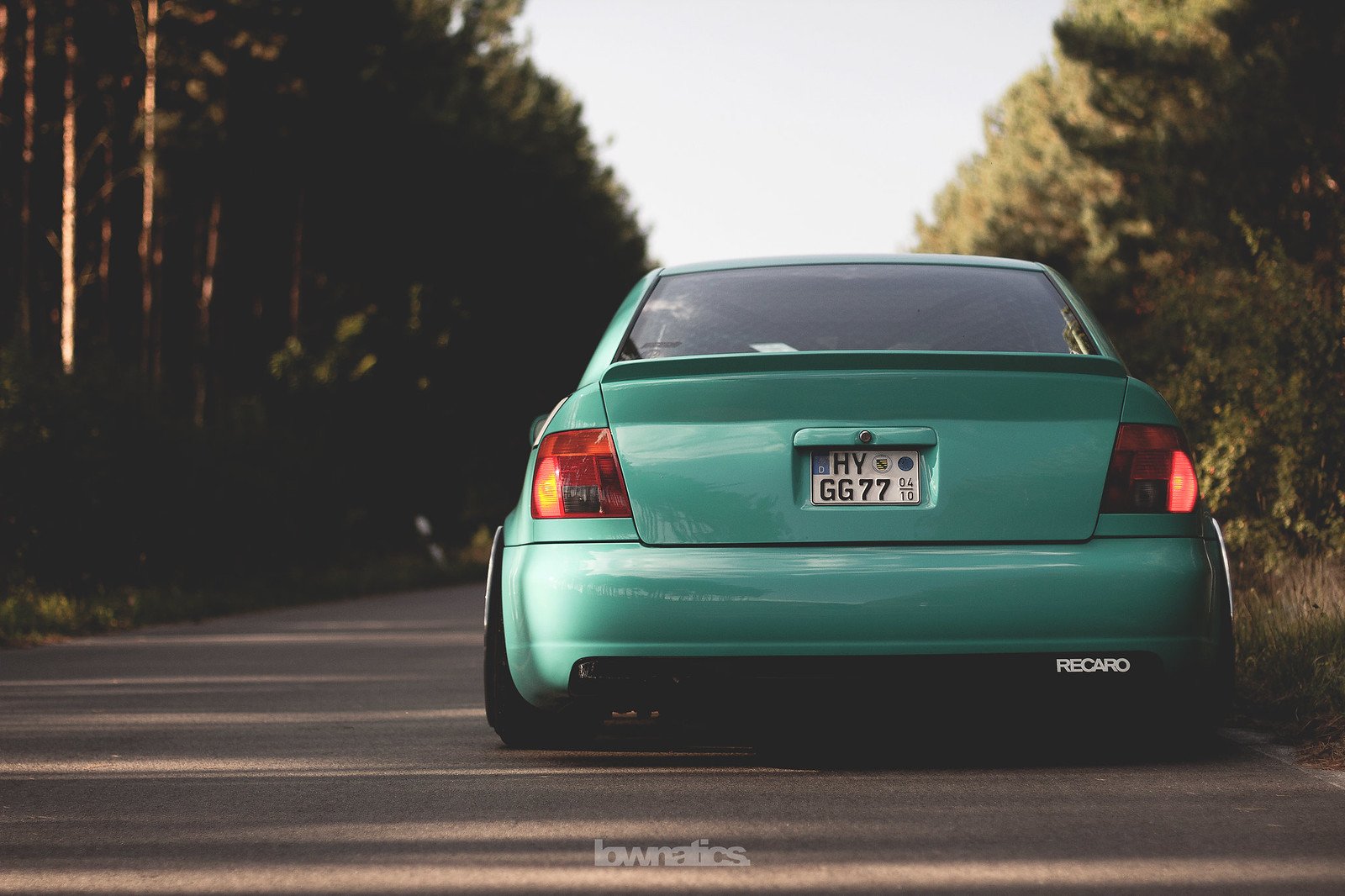 The A4’s story began in 2004 as a replacement for Christian’s Nissan Micra. A white 1.6 litre from 1995. Not able to keep his hands off the first mods came quick. FK coilovers and a set of polished 17’’ wheels off a Mercedes E Class. Restricted by his small budget, Christian went for a retro look. Some chequered black and white patterns and roof rack with a suitcase was the deal. 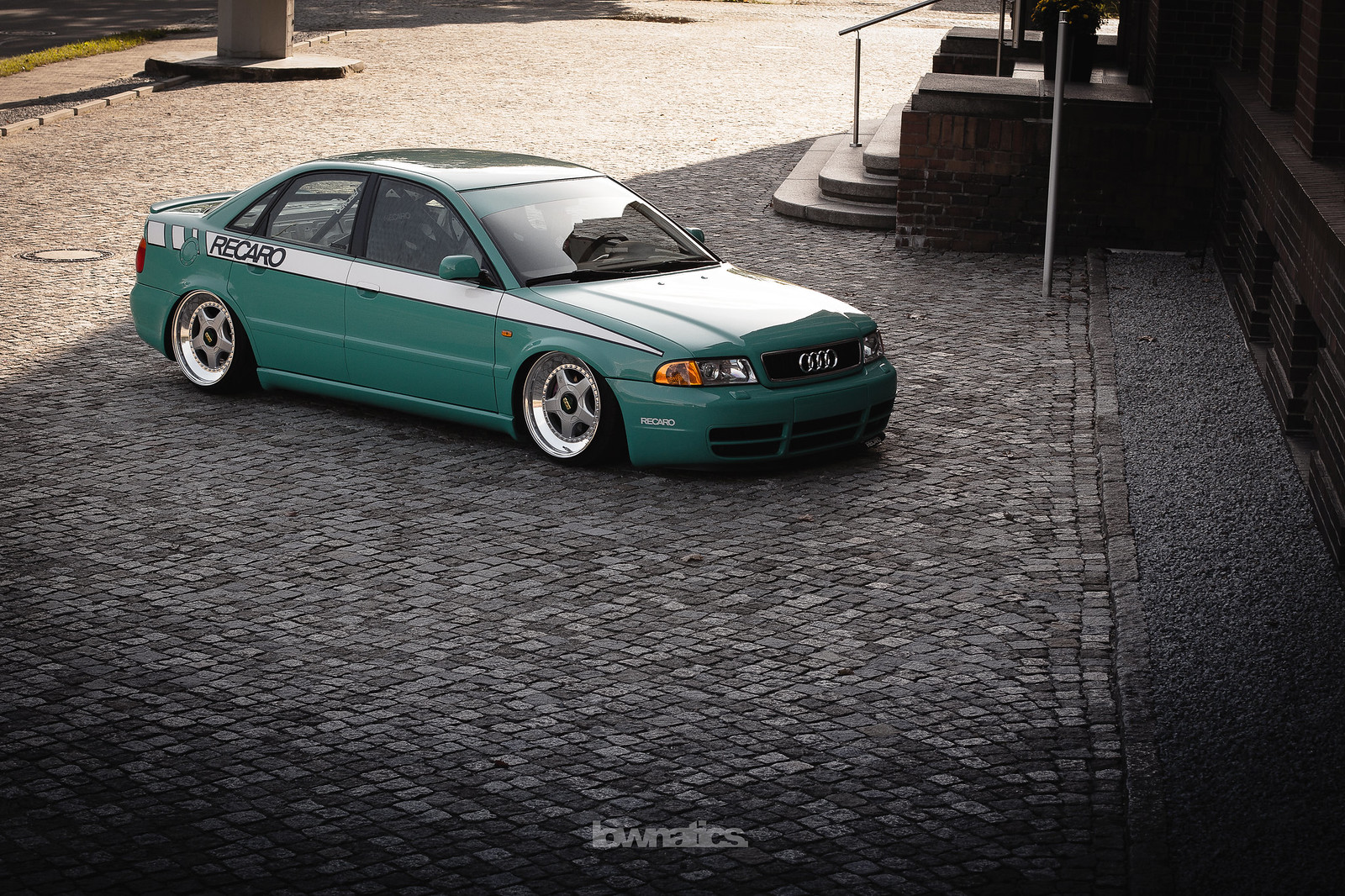 Higher demands forced Christian to build a car to only be driven during show season. The bumpers were modified and shaved; the interior was covered in cinnamon brown leather. Inner guard lining? Yeah, all that has been covered too! A polished roll cage was installed to achieve an overall sportier look. Christian updated his audio system with eight flatscreens, four amplifiers and 10 speakers! „Yeah, yeah, those were different times back then“, says Christian grinning. Even back in those days having a set of wheels was not enough. He got himself 18“ Mercedes SL Wheels, 19“ Lorinsers, 19“ Bentleys and some 19“ Detroits for in-between. After his first Wörthersee tour, Christian decided that his 1.6 litre engine does not have a place in this car anymore. Nothing standard, a 1.8 litre engine was sourced and bored to 1.9L with forged pistons, steel connecting rods, a Garrett GT2876 Turbocharger and a new exhaust system. 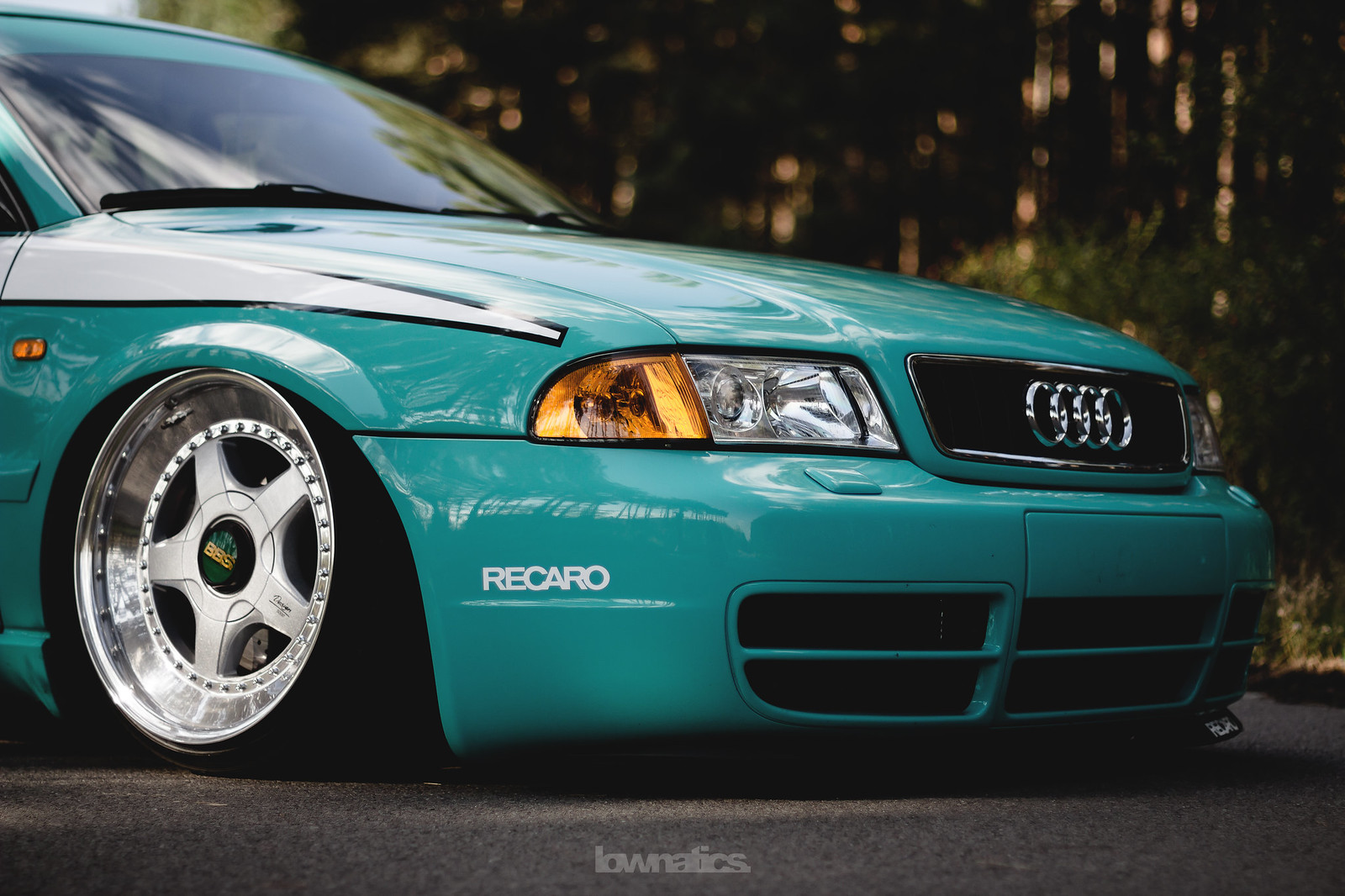 In 2011, finally, came the big change. Away from the heavy show car style to the more OEMish look with subtle touches. The A4’s sporty brother donated the S4 bumpers, sideskirts and doors. While doing bodywork, Christian widened the arches and replaced his stock fuel tank cover with the famous first gen TT fuel cap. For the icing on the cake, the whole car was painted in Tiffany blue. For orientation purposes, Christian fitted some 18×10 +9 OZ Futuras which his friend had bought from me earlier. What a small world! Christian kept wheel whoring and got himself some 19“ Mercedes CLS Wheels, 18“ Mille Miglias and the legendary 18“ BBS RT’s. 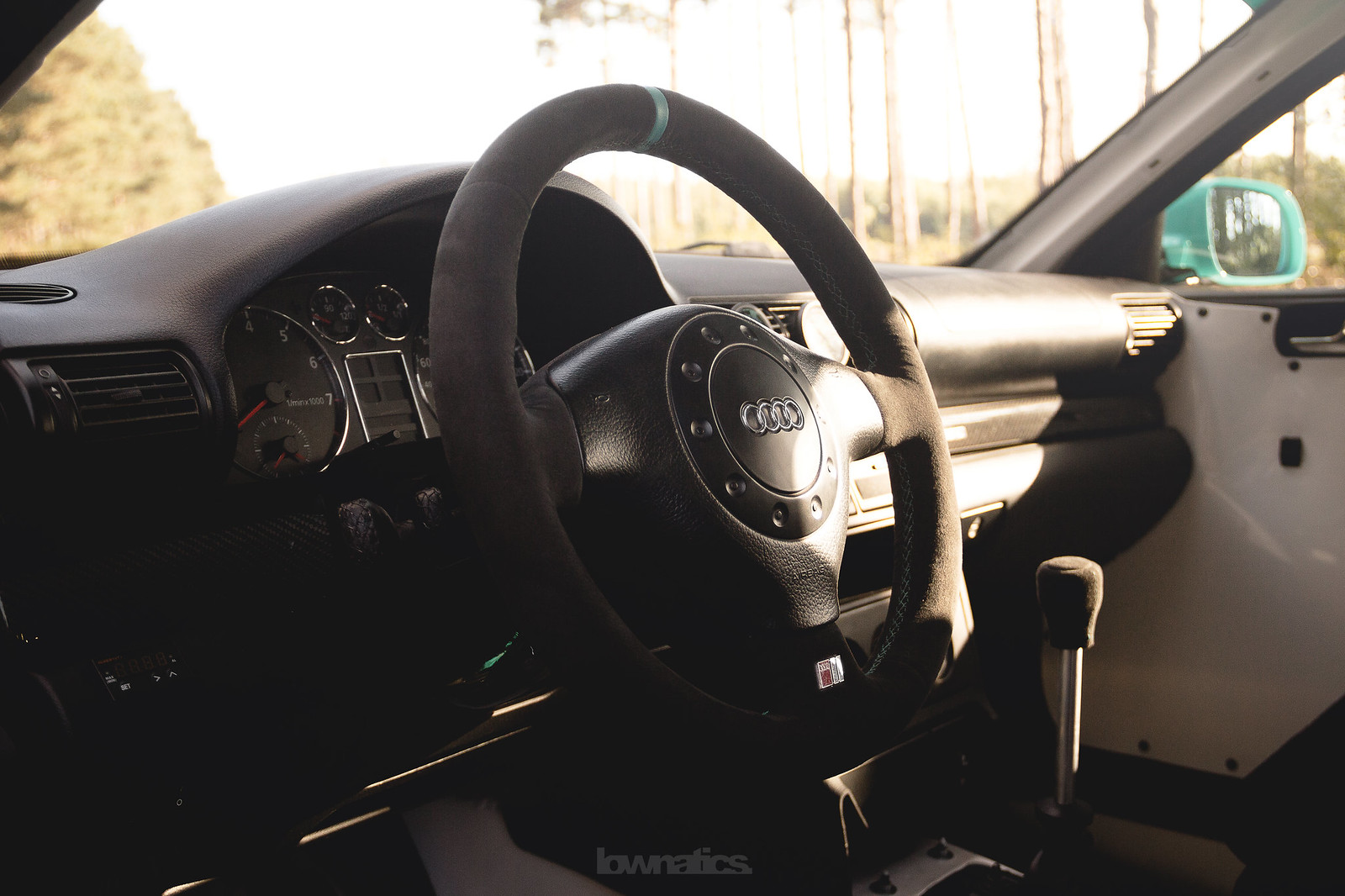 The winter of 2013/14 brought the so-much-desired decision to quit the ‘different-styles’ combination. Christian realized the need for a complete race look after mounting the RT’s, away from the show n shine. The luxurious interior and everything else providing comfort has been thrown out. The now naked interior received white paint, Recaro bucket seats, a now flat black roll cage and white door panels. A front- and boothlip were added to the exterior. 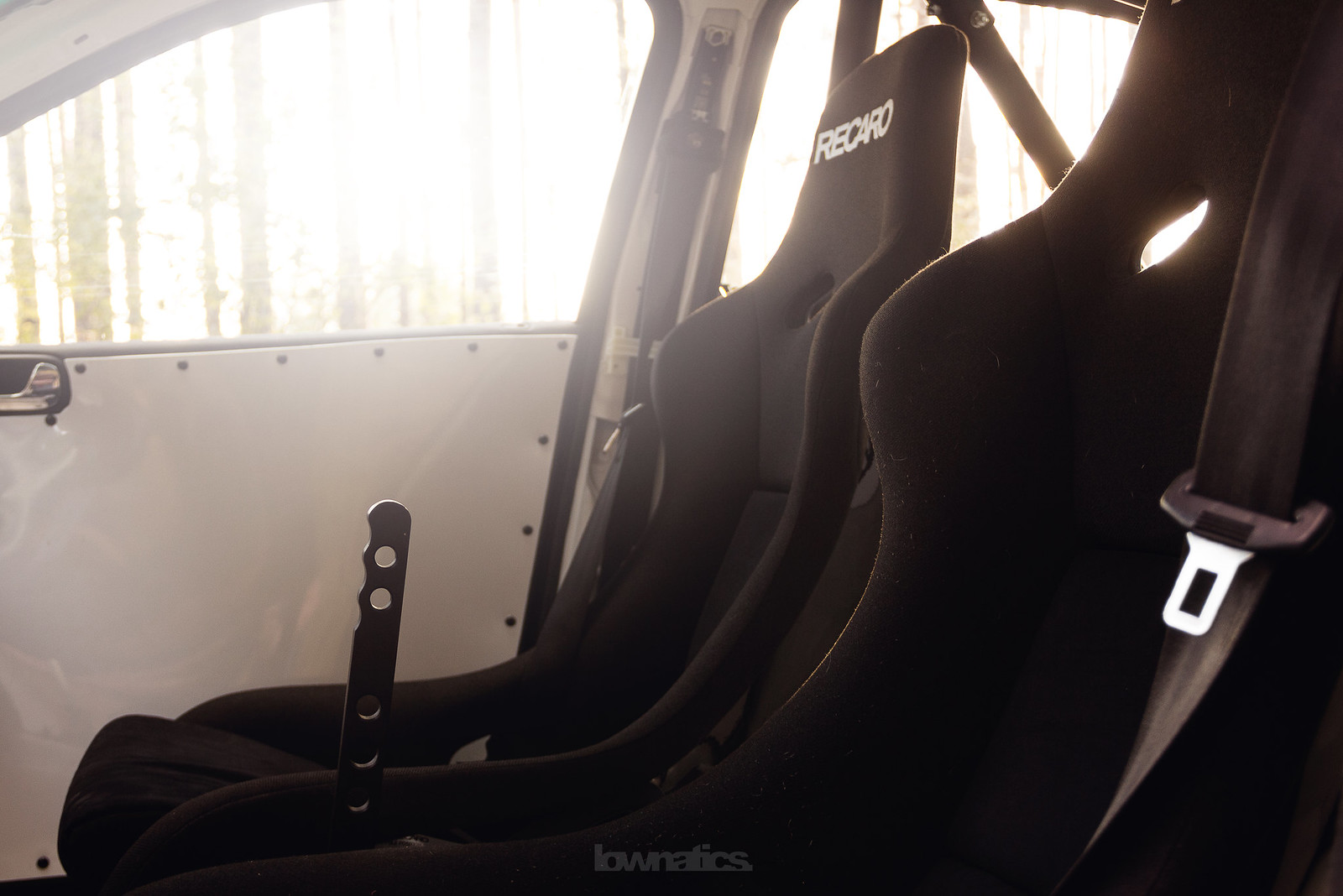 Christian converted a set of ACT SX to 19“ for his debut in 2014, which came out too slim for my taste which is probably why they didnt last that long on the A4 – haha. However there was another set to be mounted: white OZ magnesium motorsport wheels with centre locks and white tyre markings – finally a touring car. 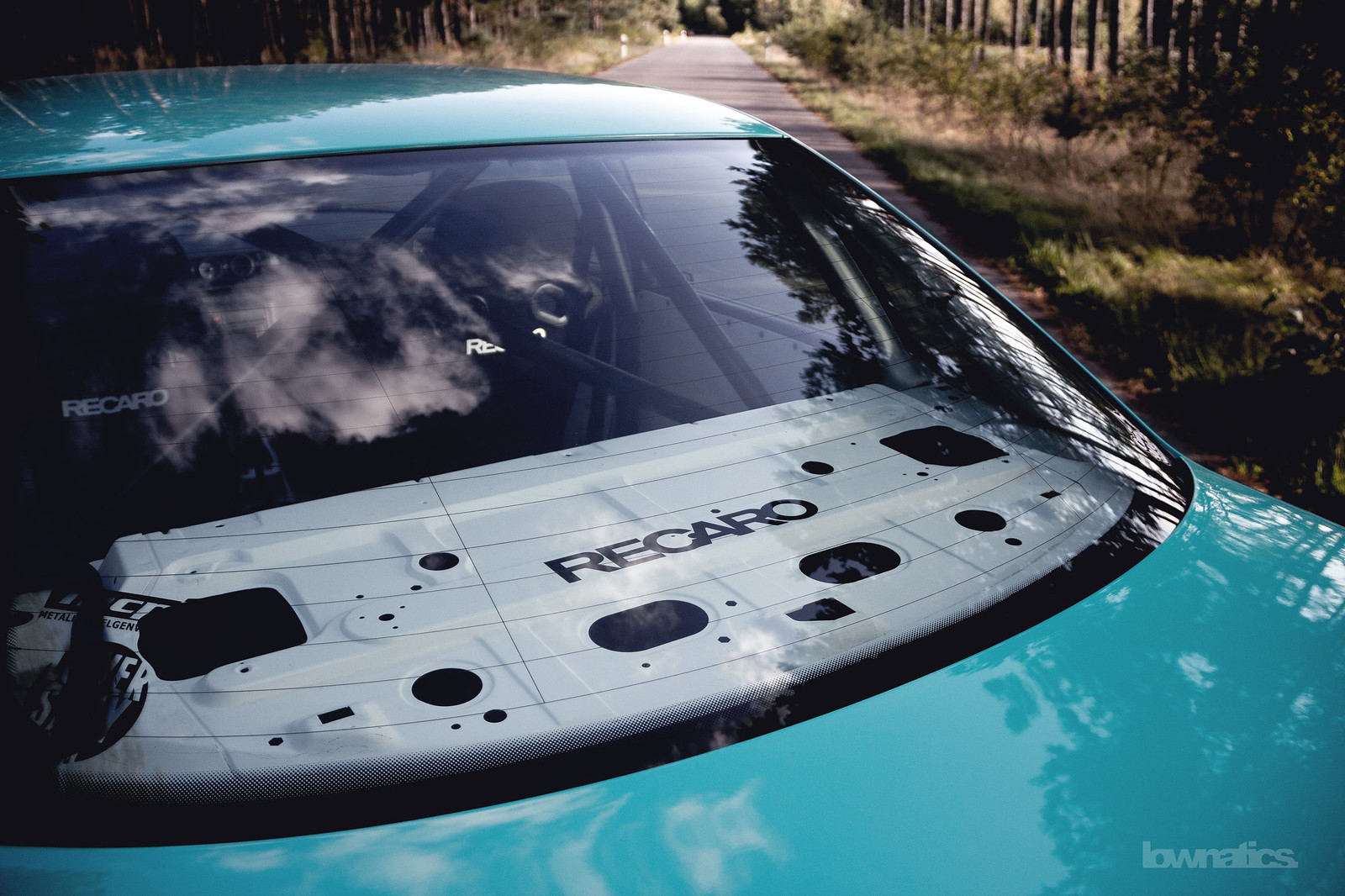 At the end of the 2014 show season, pictures of some BBS Design 5000 pieces popped up on my Facebook wall. „Gekrenzert“ was posting centres with Christian tagged in them. Christian sourced some 17“ BBS RF and slant lips to convert them to 18×9“. But Christian wasn’t satisfied with width so he got in contact with Matthias Krenzer, the owner of Gekrenzert. Matthias took a set of BBS Design 5000 which was part of Christians wheel collection and machined the centres out to make 1/2“ spacers out of them. This was the part, were I decided to snap some shots before this set got sold again. 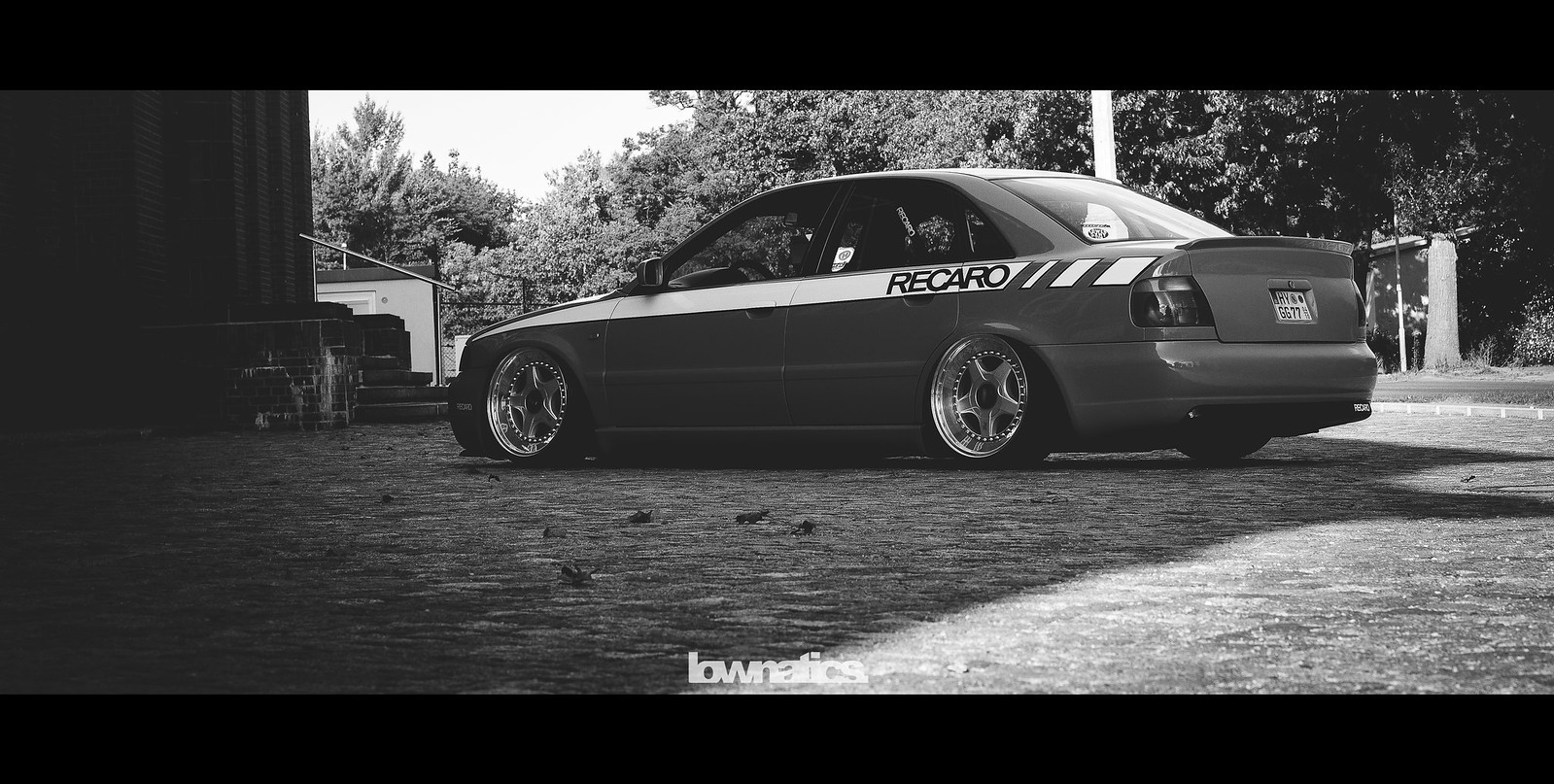