If I had to name one VW fanatic, Alexander Schoder would be the first name that comes to mind. Showcar, daily driver or even company car, it has to be a VW. He would even quit his job, if his boss changed the company cars to a different make. How ironic, that I first met him driving an E30. I was driving with a friend, when a champagne coloured BMW did a U-turn in front of us. „Hey what’s up?“, he was asking. It was his winter car. He told us that he owns an MK2 “Fire ’N’ Ice” for summer. 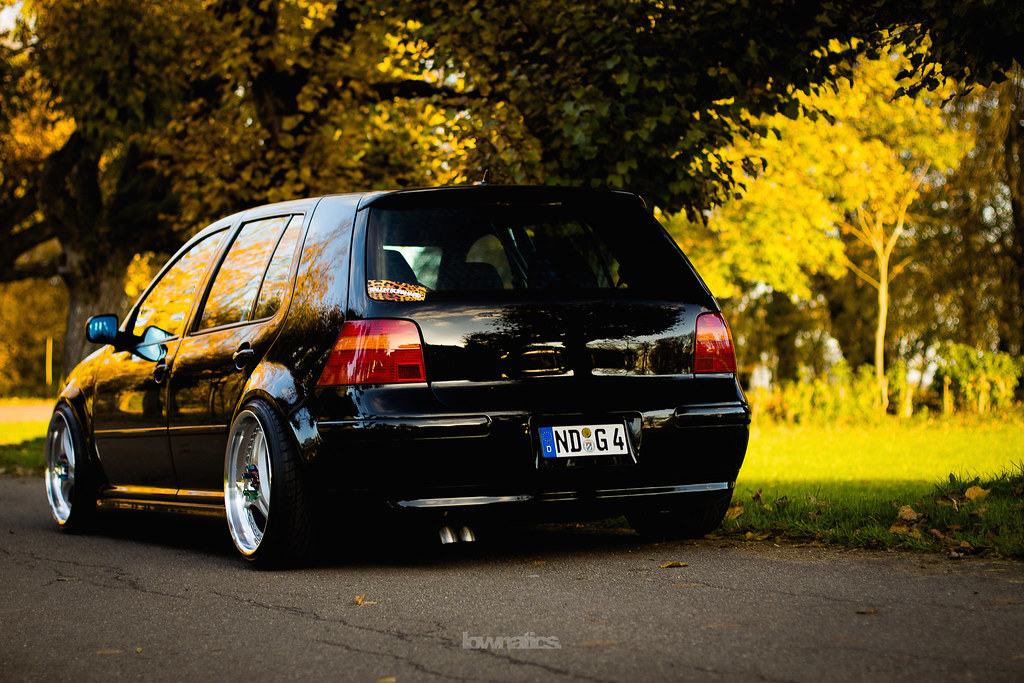 The following season, he bought himself a MK4 sport edition. 1,9TDI with 130HP. Economical and sporty but not sporty enough. Being used to the MK2’s power, the TDI needed a little push, which is why he took it to MTM. After the tune the MK4 was pushing around the same power as my A3 which was also done by MTM. We raced quite a few times after that! 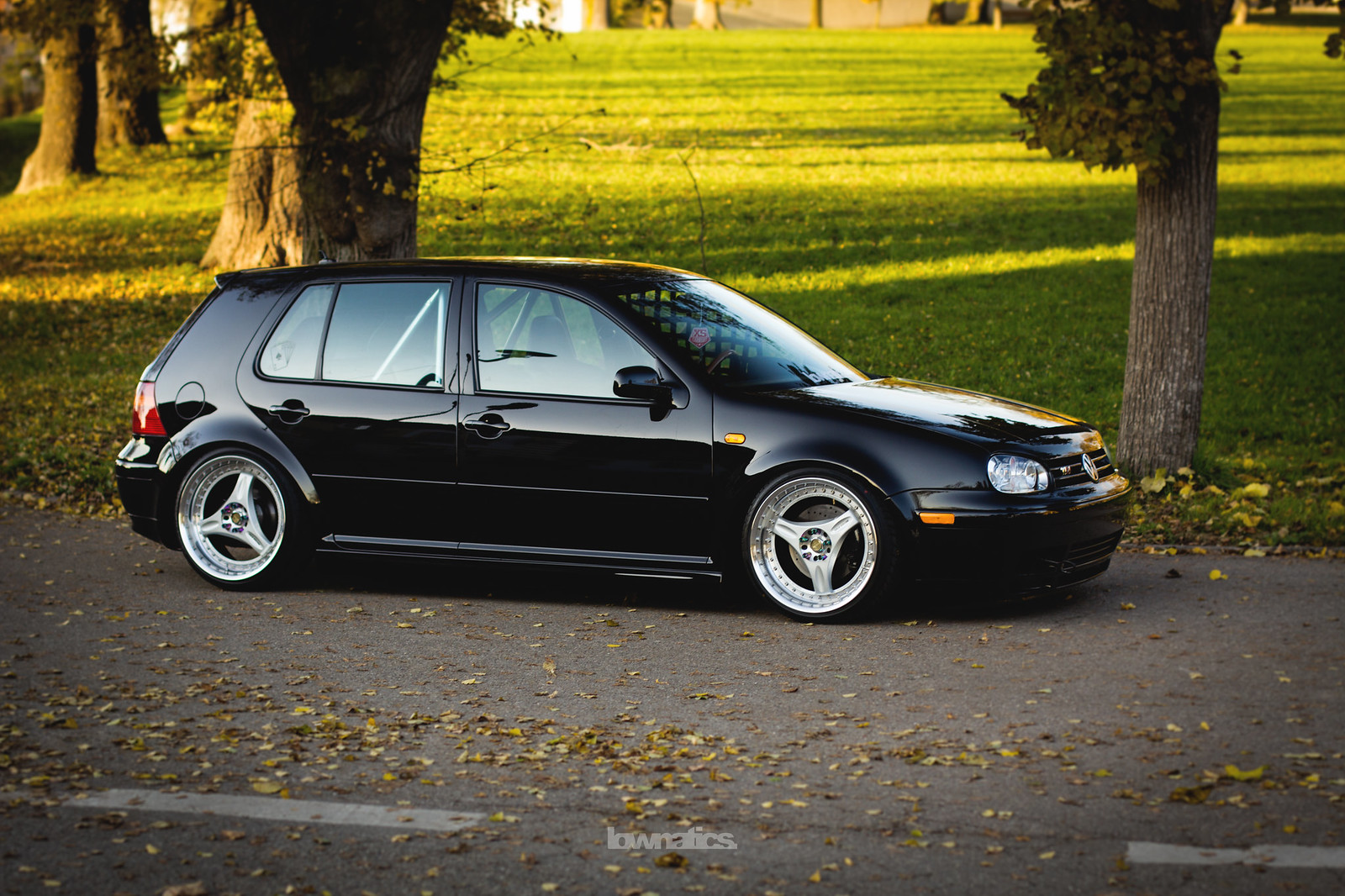 A logical step after the power upgrade was to upgrade the suspension. Weitec coilovers were sourced quickly. Checking through the forums, Alex was inspired to work on the car’s exterior. Not being a fan of plug and play, he shaved the bonnet to fit a badgeless grille and fulfilled his little dream about a shaved duckbill hatch. Sadly he couldn’t be happy for long after a little meet and great with a wild animal. 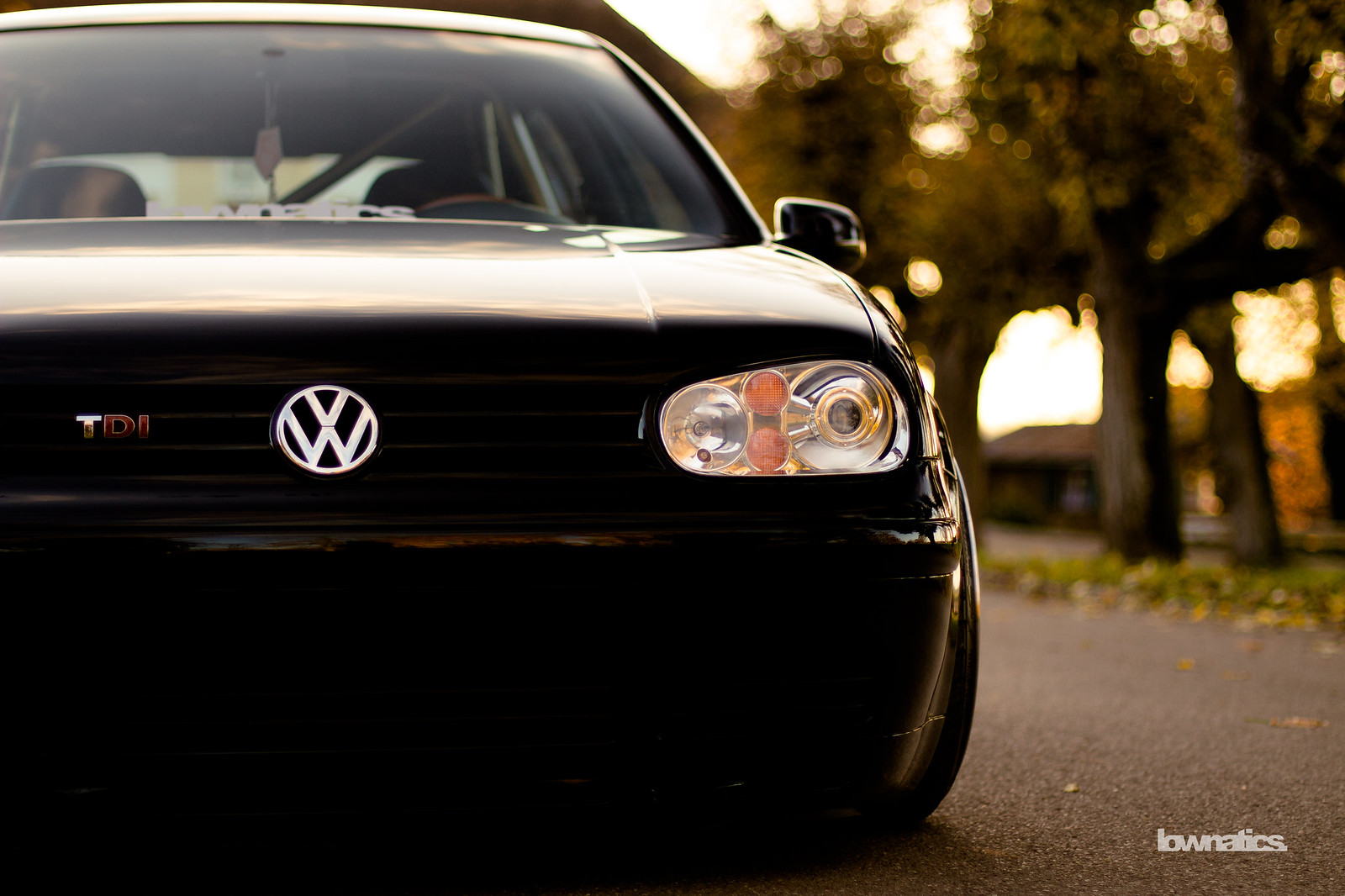 Forced to buy a new bumper, Alex decided to get an aftermarket one. He found a shaved version of the OEM front bar with an integrated grille from an Audi A6. As mentioned above, Alex is not a fan of plug and play so the animal incident was turned into a theme. He cut a hole for the intercooler and airbrushed it, to achieve a kind of crash look. To set the rest of the car off, he ordered lower sideskirts and a new rear bumper. Inspired by a gambler theme, he integrated two dice into the rear bumper. Just after finishing the body work, he realized that the front bumper based on the OEM one wasn’t low enough. Being a perfectionist, he sourced a lower one and did the same work again, all by himself. 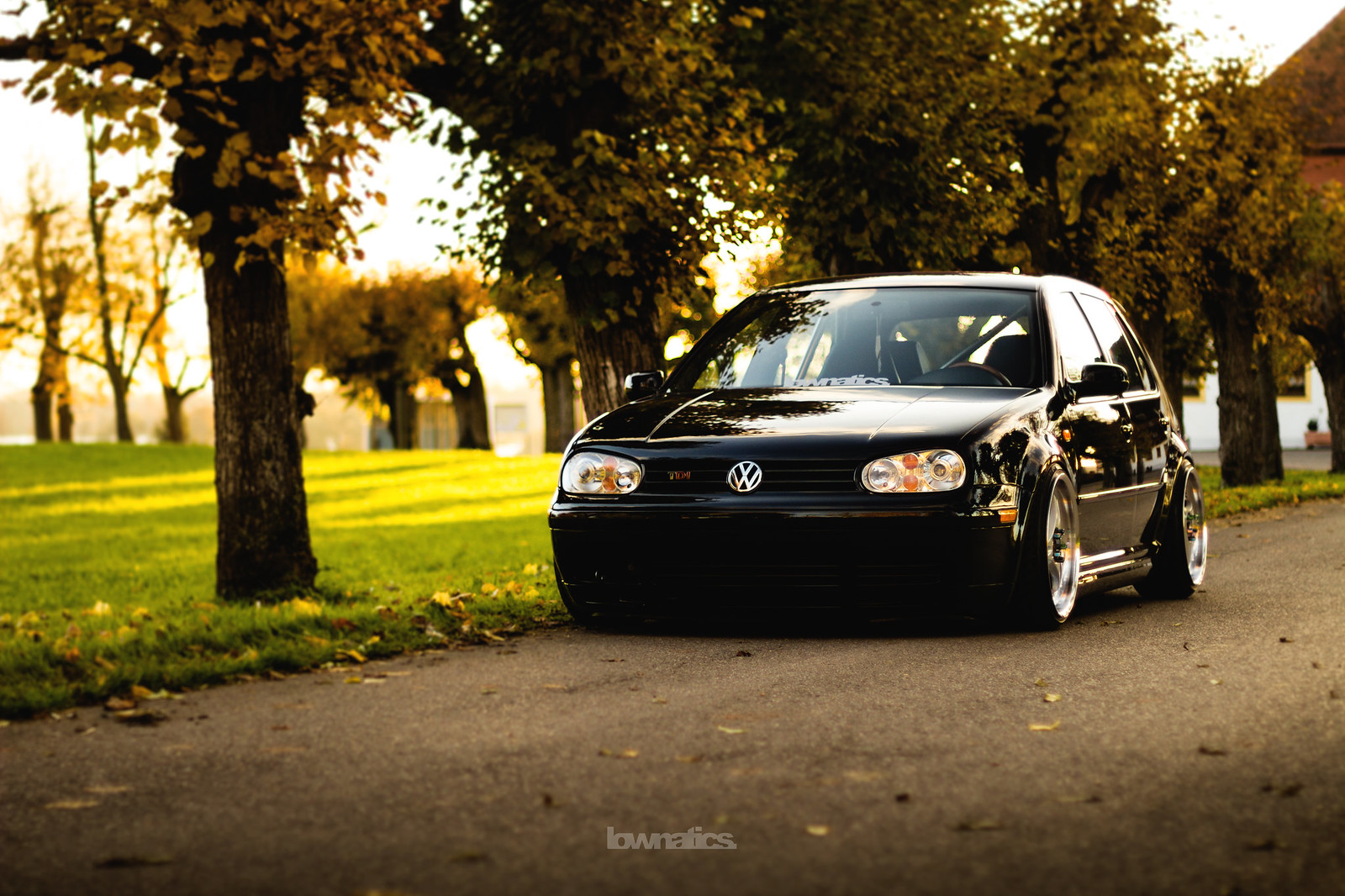 Starting with the exterior it was now time for the interior. Looking through the web he found a black R32 leather interior. A quick call to his neighbour was made and since unlike Alexander the neighbour actually answers his phone, they found themselves on a quick trip to Berlin the next day. 3 packs of HB Cigarettes (yeah that’s the chain-HB-smokers unit of measurement), and almost 14 hours later they returned. 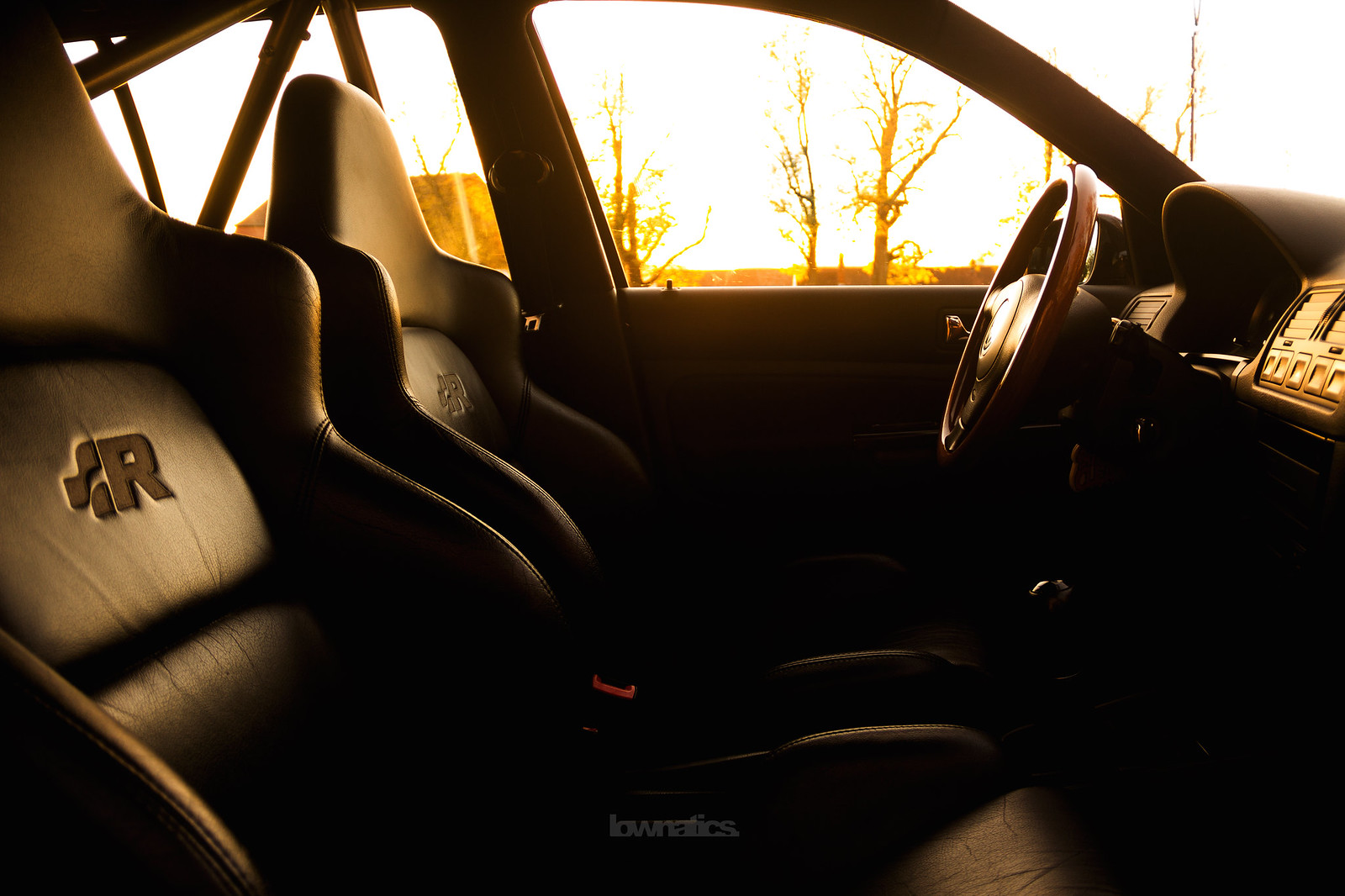 Before fitting the new seats, the interior had to become all black. Roof, door handles, seatbelt mount and even the mirror glass became all black. To top off the build, some 19“ wheels were ordered from the US. Funnily enough no one can remember the brand! 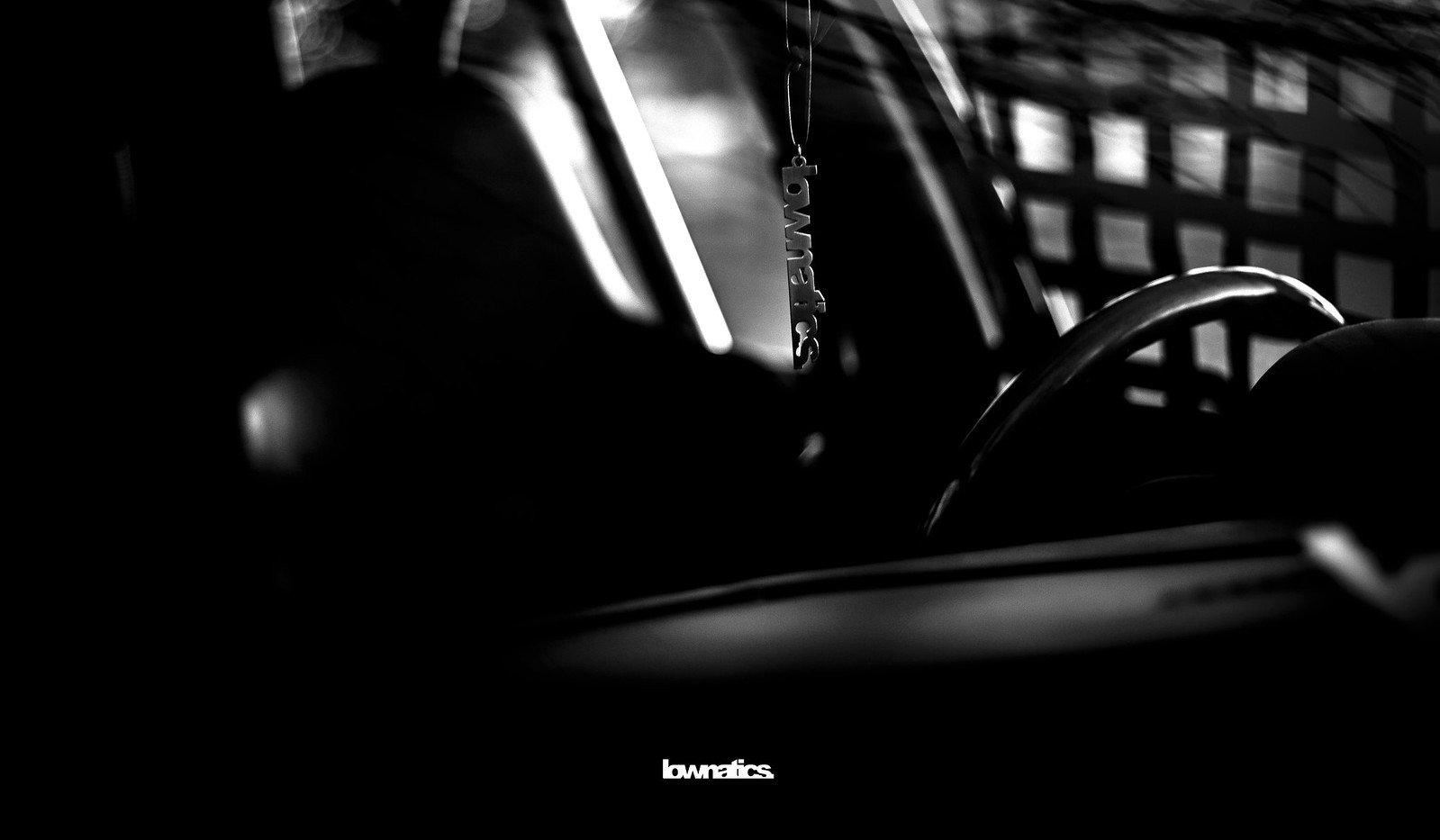 After the 2012 Wörthersee tour, Alex came to a point where he found that this whole custom theme business isn’t for him. „I have to rebuild again!“, he said. But he wasn’t alone. Alex and I plastidipped my A6 in snow camouflage a while ago. It was clear, that this does not represent me anymore. 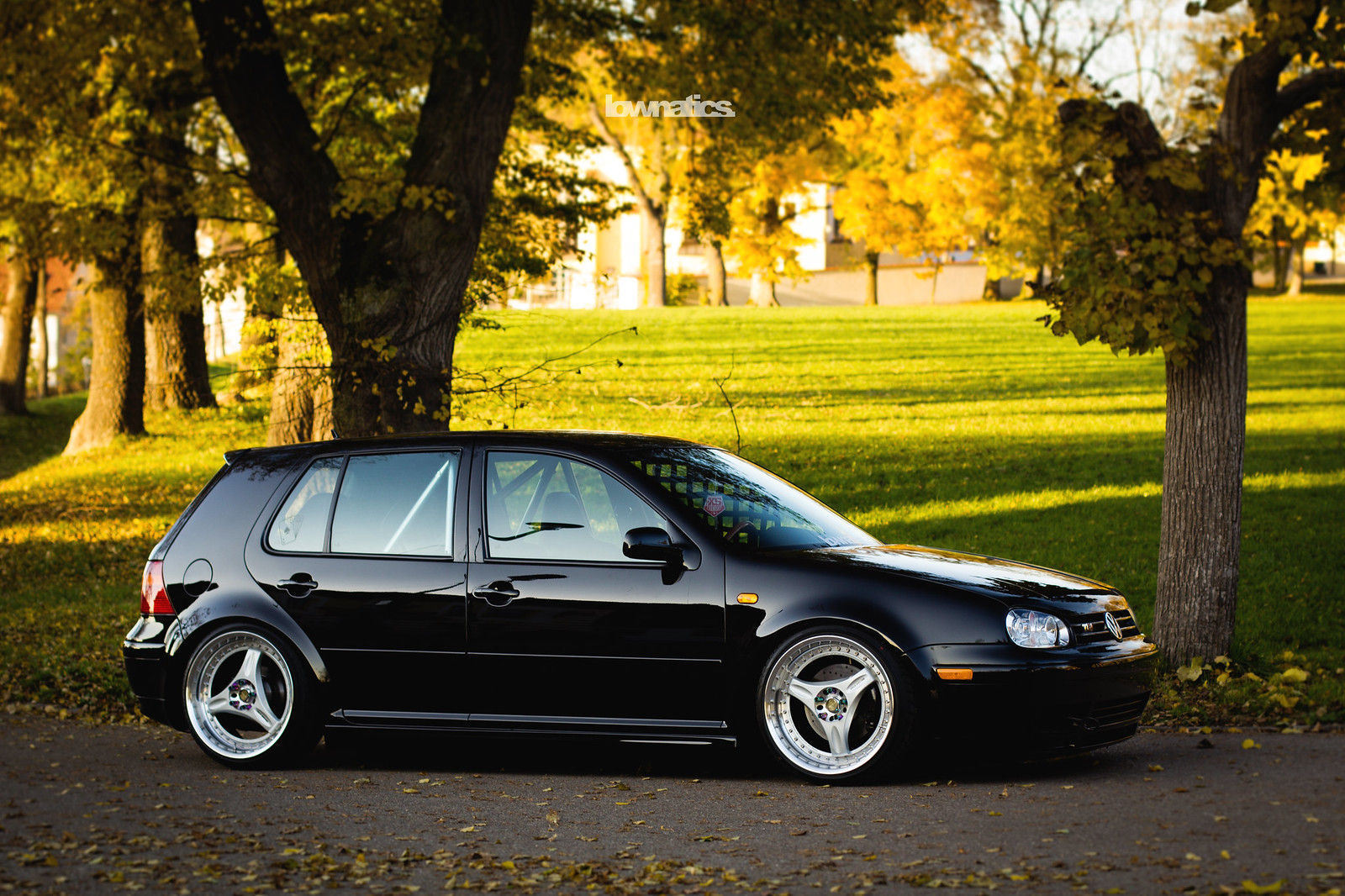 So until early 2013 he was „eliminating the disaster“, in his own words. He sourced OEM Parts in the four-digit amount at the local VW/Audi Dealer looking for US/Japan Spec parts. He had to do some work again, since the rear V6 lip had some PDC holes to be shaved and changed back to a badged grille while keeping the shaved bonnet. 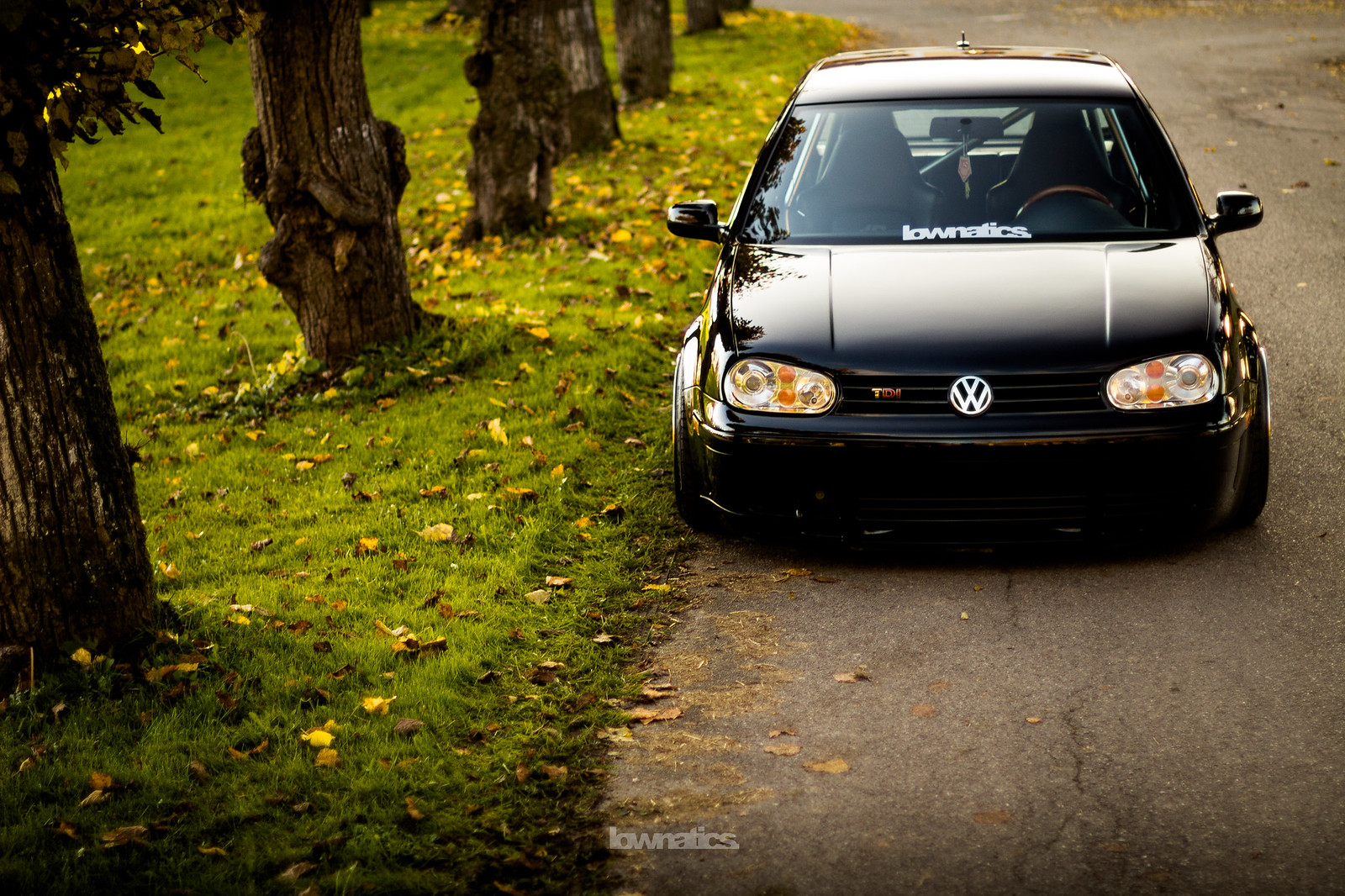 „I parked my white MK4 next to Alex’s, just to stare at it because it looked so unreal. Almost optically impossible with badge and shaved bonnet” 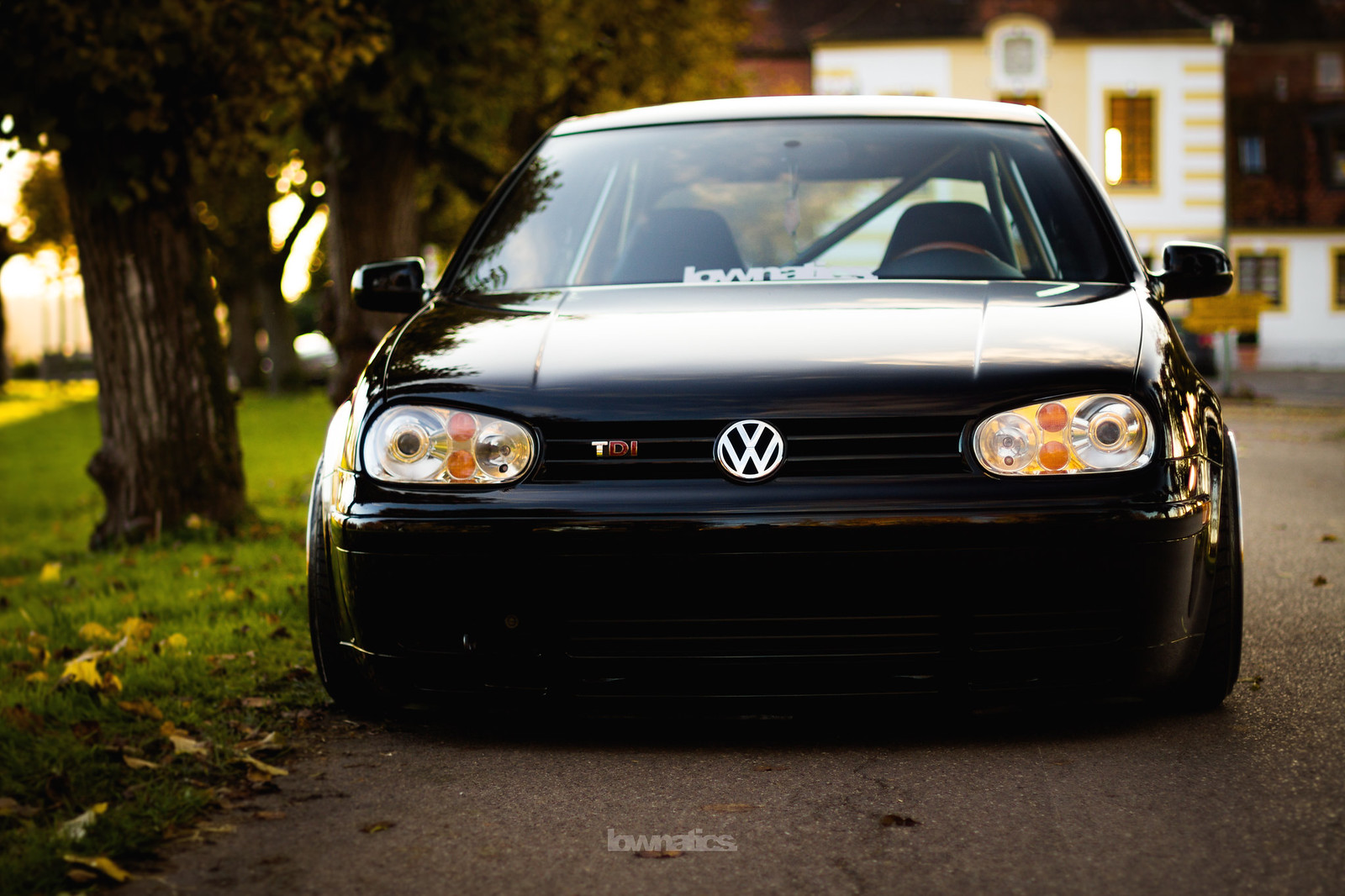 And how do you top off a US Makeover? By getting short license plates. ‘ND:G4’, very enviable. 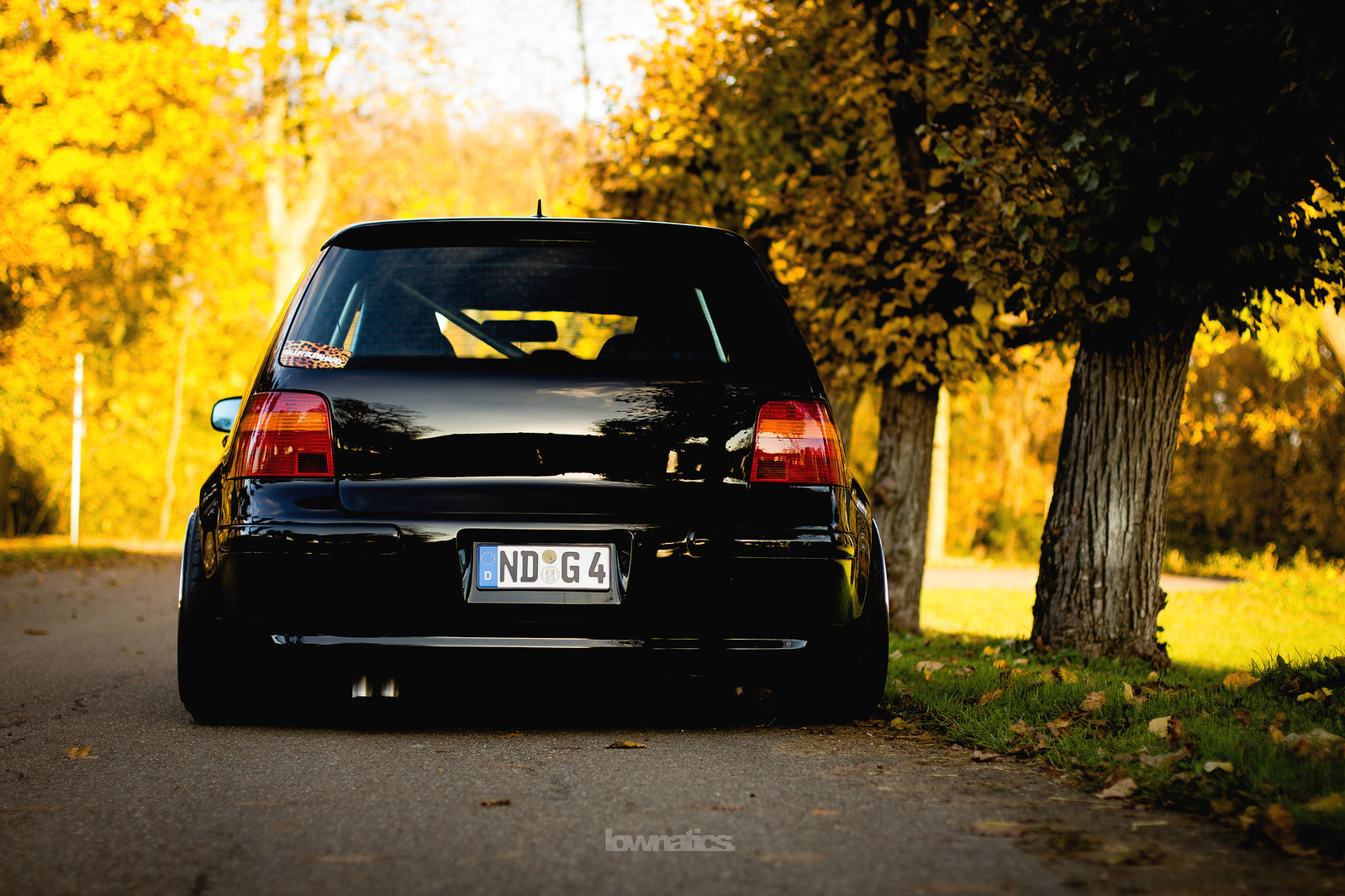 After selling the 19’’ US Wheels, he wanted some 18s. Something cheap as a temporary solution. He found some Landrover Mondials in UK. It turned out to be more difficult than he expected, because he wanted to keep the massive Landrover Wheel Nuts. With no time to wait for custom-made adapters, the fronts came out two- and the rear ones three piece. Zero offset. Smaller wheels required a lower body, which meant modifying frame and coilovers for the MK4 platform. The stance came out very nice, ‘rip-oilpan-1’ nice. 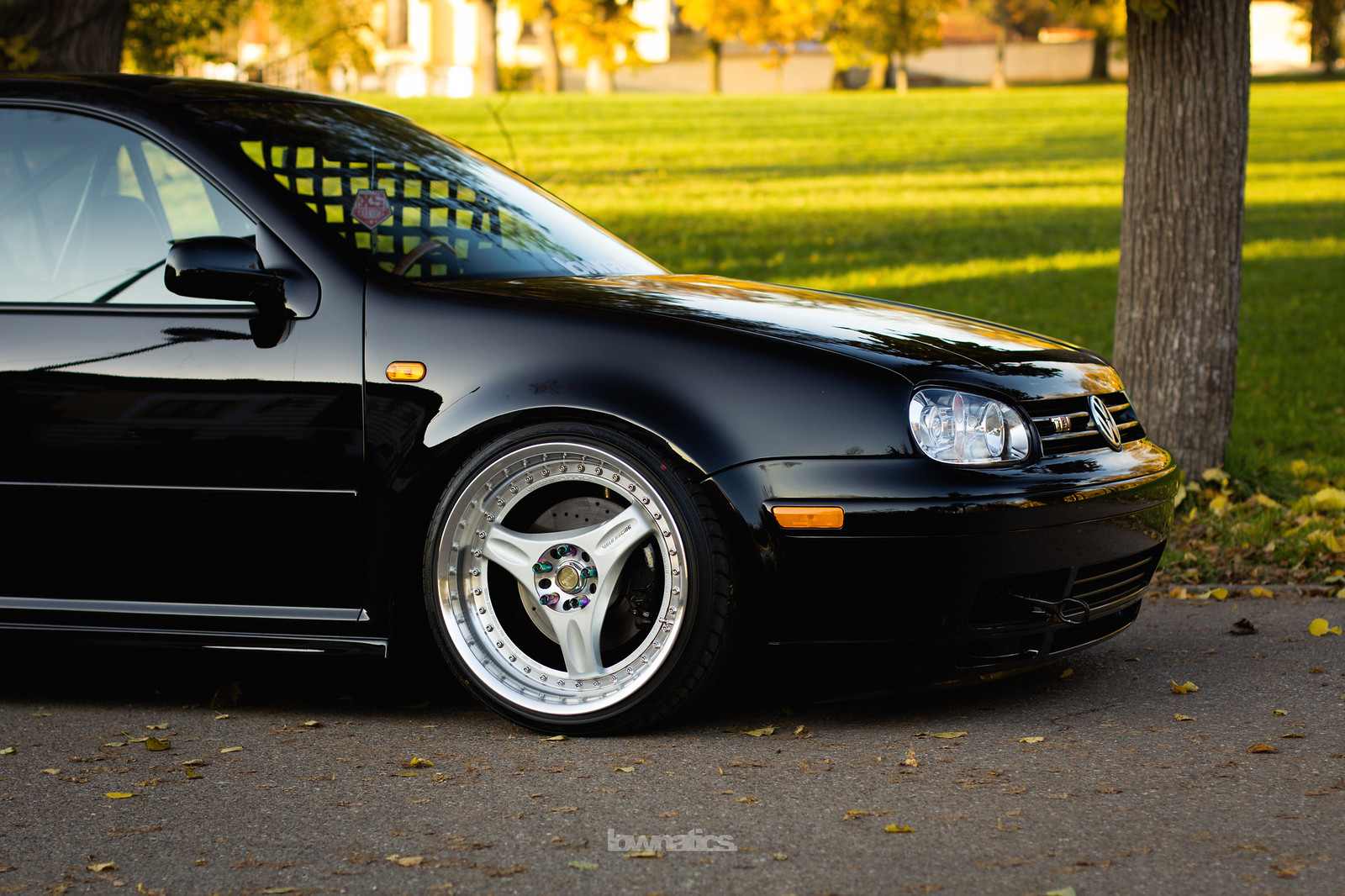 Now it was time for some serious 3 piece wheels. Browsing the interwebs he saw a picture of Volk C Ultras and instantly fell in love. Finding these in 18“ was very tough, but after some hardcore internet research he found two old adverts. One was from the Czech Republic and the other one from not-so-near Australia. Of course the set from the Czech Republic was already gone. Out of ideas and barely able to speak English he out took his mobile phone and called the seller. It must have been 100 o’clock or something but the sleepy seller told him, that they are still available – bought! Who does this? 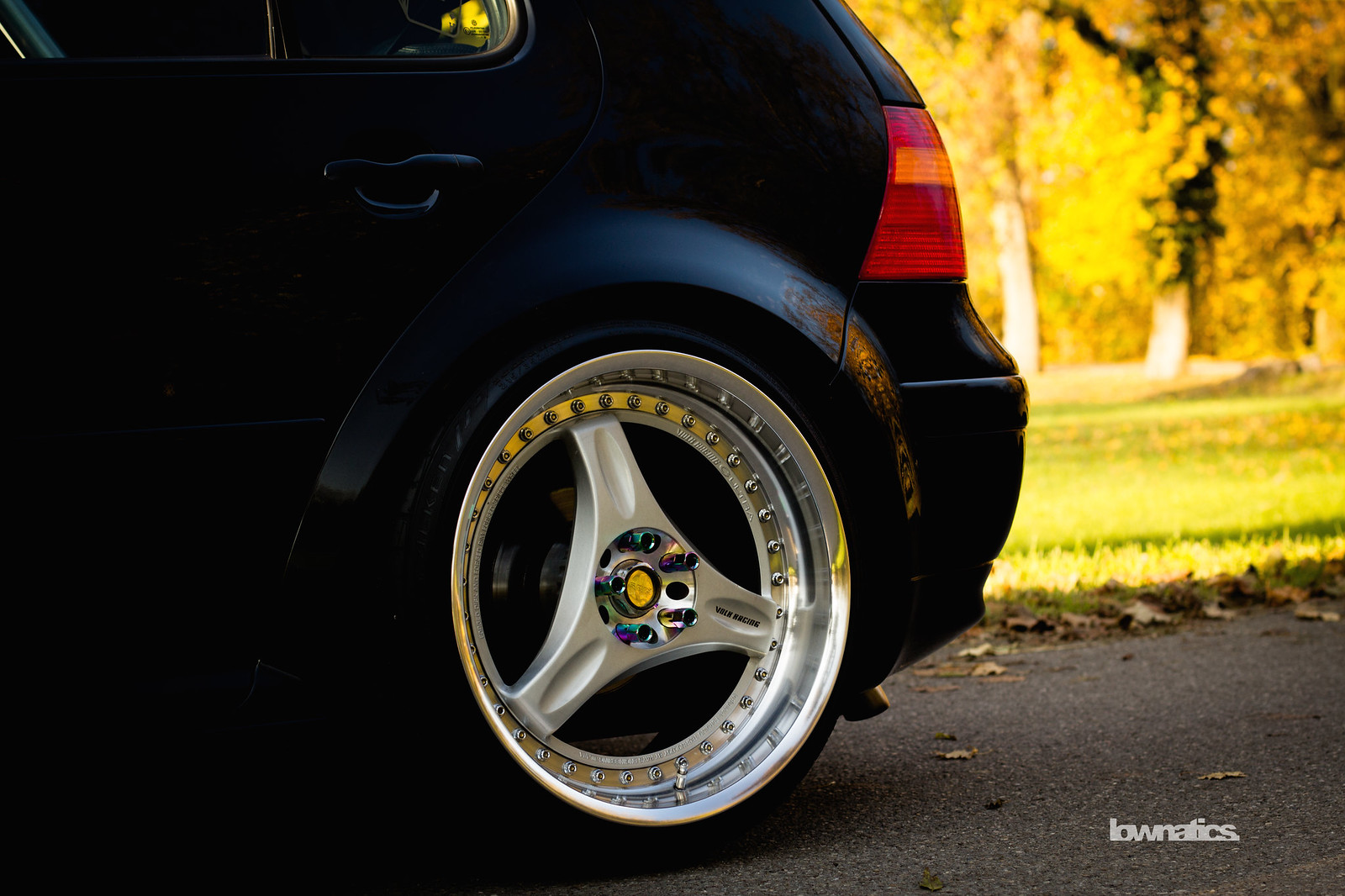 The now sportier look required some sporty gadgets. After some messages with Felix Beranek, he got himself a rollcage and jokingly a window net as seen in racecars. 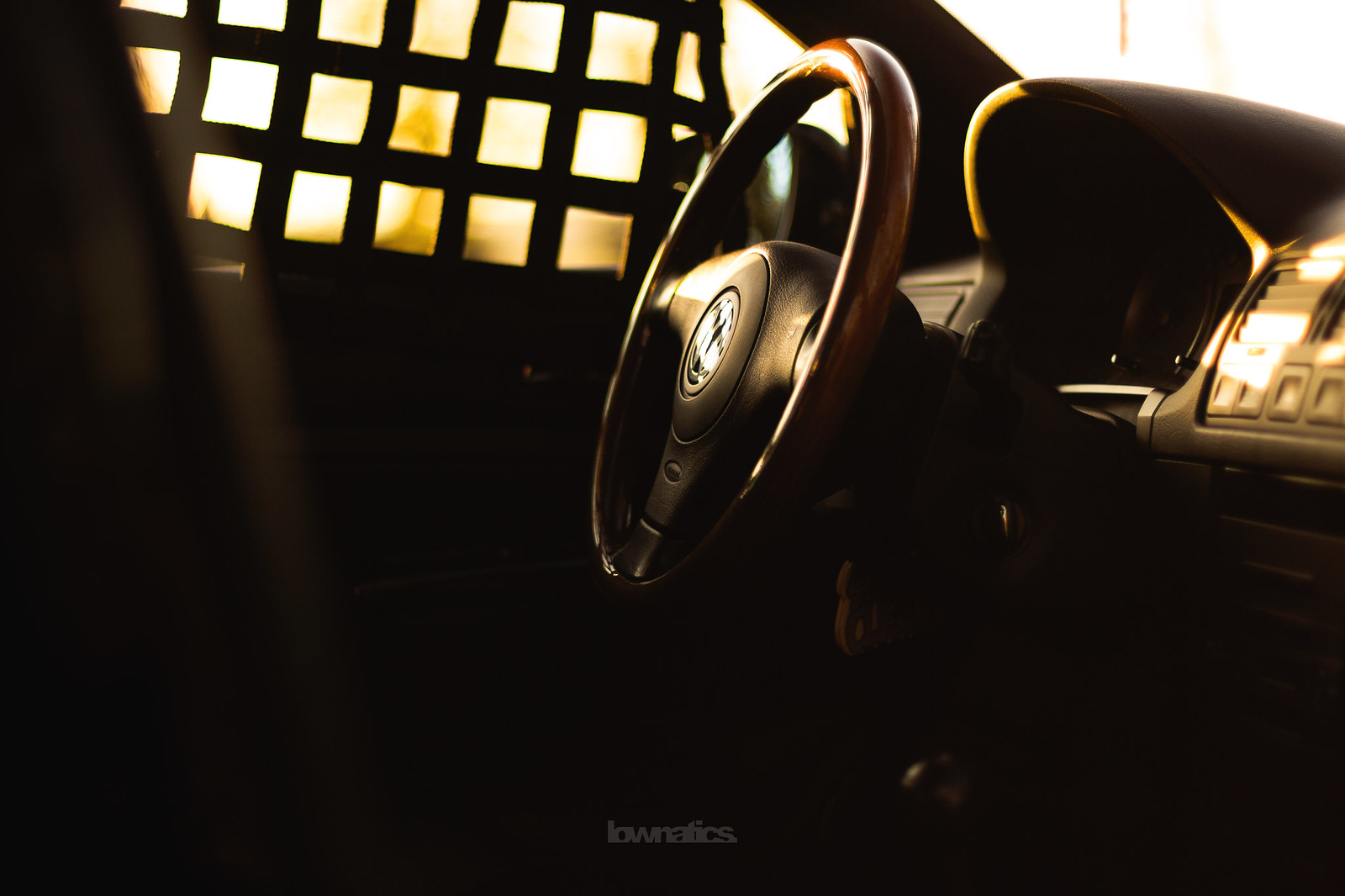 At the end of this season he ripped his second oilpan, which is why we had to tow the car to this photoshoot. I can’t wait to see this car back out on the streets, pushing a little bit more Diesel power in the near future…. 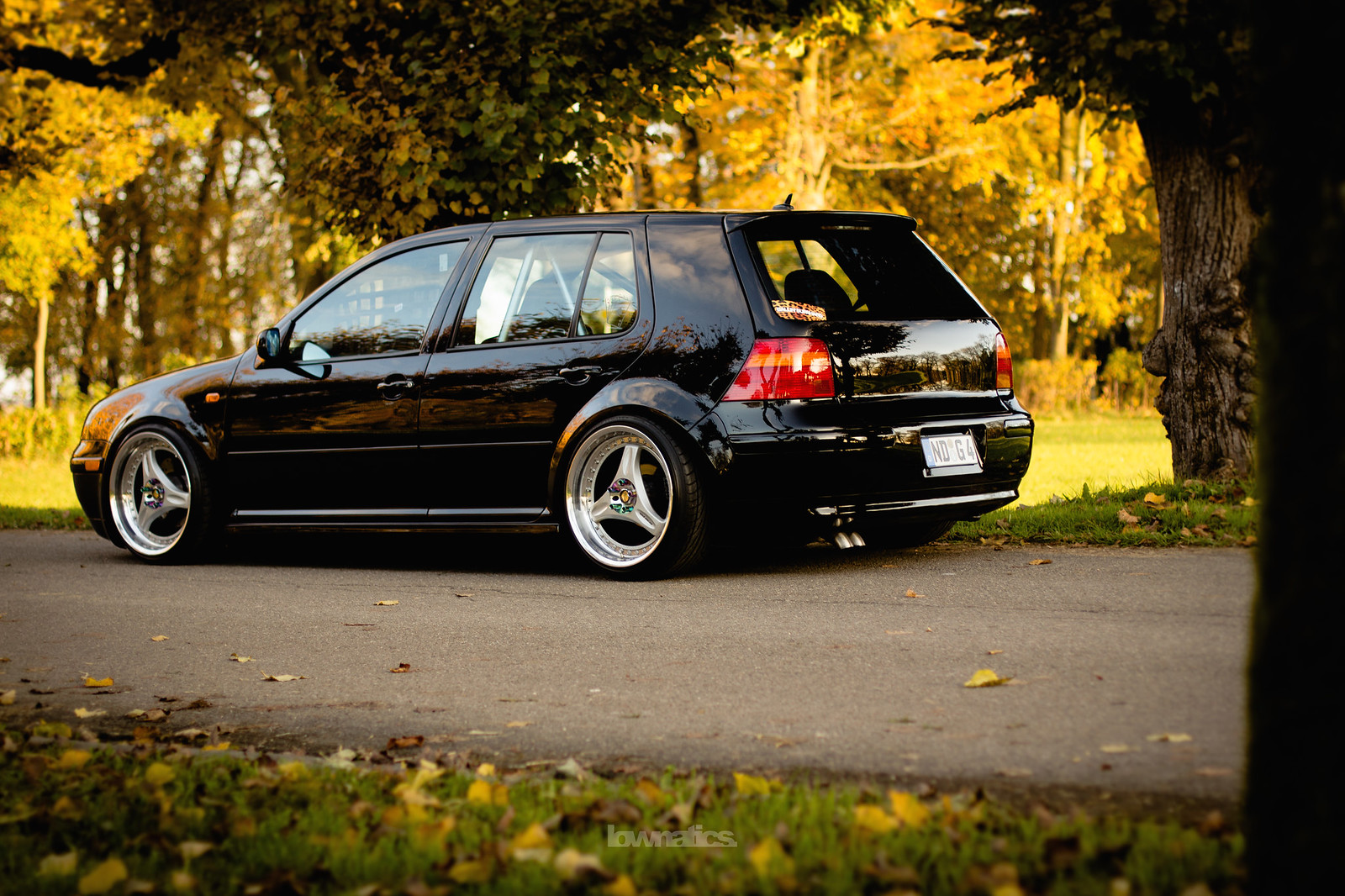